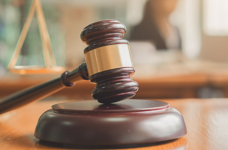 The mechanism of disciplinary liability of judges in Moldova is extremely complex, which induces mistrust in proceedings both on the part of litigants and public opinion, and of judges . Over the last five years, more than 7,500 complaints have been filed to the Superior Council of Magistracy (SCM) regarding the actions of judges, based on which 250 judges have appeared before the Disciplinary Board and 49 sanctions have been applied. For each case, which goes through all stages of a disciplinary procedure, at least five institutions are involved and between 30 and 38 people are allocated.  On average, each case lasts up to  400 days. Thus, the mechanism should be simplified and made more effective  to make the judges accountable, without affecting – in any way  – their independence.  These are the main conclusions of the analytical document “Disciplinary liability of judges in the Republic of Moldova. Evaluation of legislation and practices”, elaborated by Dr. Cristi DANILEȚ, a judge at the Cluj Tribunal in Romania. The analytical document was launched on 10 July 2020 in Chișinău.

The author notes that the dysfunctions of the disciplinary system are related not only to the way the disciplinary offences are being defined, meaning to the procedure of disciplinary liability of magistrates itself, but also to the issues related to the administration of justice and the independence of judges.

Judges should not be disciplinary sanctioned for poor professional performance or violation of ethics. Disciplinary offences must be strictly related to the activity of a judge. Along with strengthening the disciplinary mechanism, efforts must be made to optimize the work of judges – ensuring an adequate number of cases and a sufficient number of judges, and technical staff. At the same time, judges must be protected from pressure from within the system (especially from court’s management), but also from outside (prosecutors and politicians). There are worrying statements that judges who adopted decisions contrary to expectations or tried to  oppose to such influences, immediately dealt with various disciplinary or other procedures, lower grades, or were forced to leave the system.

The Law on Disciplinary Liability of Judges (in force since 2015) and the new Administrative Code (in force since 2019) have burdened the activity of verification and investigation of judges and have overloaded the entities involved in the disciplinary procedure. For instance, in 2019, only for 13 disciplinary sanctions were allocated 30-38 persons, out of which at least 16 were judges. This mechanism involves too many institutions: the Judicial Inspection, the Admissibility Panel, the Disciplinary Board, the SCM, the Court of Appeal and the Supreme Court of Justice, making for a more cumbersome procedure. In order to streamline the process, the author recommends to reduce the allocated time and human resources involved.

More findings and recommendations related to the efficiency of the disciplinary activity can be found in the analytical document “Disciplinary liability of judges in the Republic of Moldova. Evaluation of legislation and practices”.

The analytical document was developed within the project “Promoting the rule of law through monitoring by civil society”, implemented by the LRCM with the support of the US Agency for International Development (USAID).

The document is available in Romanian.