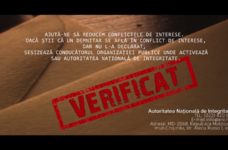 The Legal Resources Centre from Moldova has developed a social video clip that explains to the general public what is the conflict of interest and the procedure for notification of authorities about such situations. The clip comes to highlight the duty of dignitaries or civil servants to avoid or declare conflicts of interest in the exercise of public function.

The spot was launched in order to increase the level of public awareness of the conflict of interest and the authorities’ notification procedure. At the same time, the clip urges citizens to report to the head of the public organization in which they work or to the National Integrity Authority if they know cases where civil servants are in conflict of interest, thus helping to reduce the number of undeclared conflicts of interest.

The spot is available in Romanian (with subtitles in Russian) and can be viewed below:

The video clip was realized within the project “Empowering Moldovan Civil Society to Demand Justice” implemented by the Legal Resources Centre from Moldova with the financial support of the US State Department through the State Bureau of International Narcotics and Law Enforcement Affairs of the United States Embassy in Moldova.